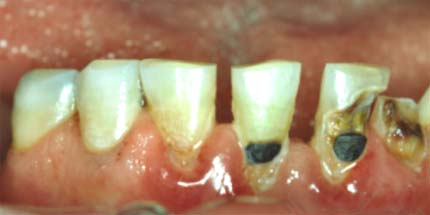 It is primarily a dentinal caries, even though the cementum (or enamel at the cementum-enamel juntion) may have been involved in the the caries progression depending on whether the site of attack was covered by cementum, enamel, both, or neither (Scott and Symons, 1974; Provenza, 1988).

In the younger population, it is due to poor oral hygiene and improper plaque control procedures (Ole & Edwina, 2003 , p. 92).

For the older population, even for those who have regular oral hygiene, is due to loss of periodontal attachment with age (Ole & Edwina, 2003 , p. 92). 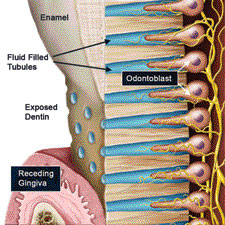 Fig. 2: Exposure of dentin as a result of receding gingiva
(Strassler et al, 2008)

Changes in the Cementum

The recession of the gingival margin results in the exposure of the enamel cementum junction (ECJ). Majority of root caries occur at this site as this is good site for bacteria retention due to its irregular structure. The exposed cementum will be decalcified and cementum plays an important role in protecting the underlying dentine of exposed tooth roots against acidic demineralisation (McIntyre et al, 2000, p97 - 102). Without an intact cementum there is a doubled loss of Ca and P from the root surface.

Specifically, cementum is invaded along the direction of the Sharpey’s Fibers that are the ends of the principal fibres of the periodontal ligament inserting into the cementum at right angles to the root surface (Cawson, R.A. & Odell, E.W., 2008, p. 54-55).

Infection spreads between the lamellae along the incremental lines, resulting in the dentine becoming split up and progressively destroyed by a combination of demineralisation and proteolysis. (Cawson, R.A. & Odell, E.W., 2008, p. 54-55)

The further progress of caries in the underlying dentine is similar to that in other parts of the tooth.

Root caries may or may not be cavitated, showing a continuum of clinical symptoms from a small, slightly softened and discoloured area to an extensive, yellow-brown, soft or hard area that encircles the entire root surface (Newbrun, 1989).

It is important to distinguish between the active and arrested state of lesion as root surfaces so that regular plaque removal can be administered in the case of active lesions so as to arrest the lesion and prevent further progression of the lesion due to dynamic metabolic processes in plaque (these may affect sealants administered).

In the arrested state, the lesion is no longer expected to progress unless there is a stark deterioration of the oral hygiene in the area.

Early root surface caries lesions are seen as radiolucent zones in the root cementum. There is exposure of dentin to the oral environment due to improper tooth brushing techniques or damage caused by root surface scaling.

The mineral content of the surface zone of the lesion increases with increased duration of cariogenic stimuli while the dentin undergoes a progressive subsurface loss of material concurrently. This high surface zone mineral content is due to selective redeposition of the dissolved minerals from the dentin, but the apatite crystals here are significantly larger, isodiametric rhombohedral crystals known as "caries crystals" (Newbrun, 1989, p. 265) compared to the original platelike hydroxyapatite crystals in normal cementum.

The surface of the root caries appears softened due to microbial penetration between the partially demineralised collgen fibres (periphery of Sharpey's fibres). Hence, it is important to remember not to probe or scale this vulnerable surface till the lesion has been arrested fully.

Advanced root surface caries lesions are seen when the demineralization process has spread to the dentin below, several mircometres below the cementum surface. Dentin response is similar to that in coronal caries: Sclerosis occurs (increase in mineralization) deep within the tissue corresponding to the carious region on the surface of the tooth; tertiary dentin forms towards the pulp in involved tubules (Fejerskov and Kidd, 2003)

Change in the oral environment may result in mineral deposition in the microbial mass, resulting in calculus partially occluding root surface defects corresponding to arrested caries lesions. Hence, non-operative treatment to achieve this can be used instead of operative or antimicrobial treatment to mineralize plaque into calculus, extending into microcavities to arrest caries lesions.

Current technology does not allow for us to look into the actual time frame for development of caries within dentin as restoration is typically done once the caries reaches the dentin. Yet this is less of a concern than the need to find out new diagnostic measures for pre-clinical diagnosis of caries, both root (dentine) or coronal, so as to arrest lesions early and prevent the spread of disease in the tooth - rather than wait to treat it after it has progressed to an irreversible stage.